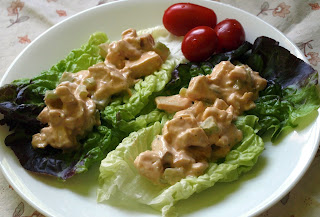 But man (and girls!) cannot live on wings and tenders alone, so I decided to venture away from the traditional to see what other buffalo ideas are to be had.


This experiment started with one of those humongous packages of boneless, skinless chicken breasts, which I cooked on the grill.  While they were cooking, I basted them with buffalo wing sauce.  I used bottled wing sauce (Frank's RedHot Buffalo Wing Sauce) but when that bottle is empty, I will make my own by mixing 1/2 cup Frank's Original Red Hot Sauce and 1/3 cup melted butter.

I'm going on the theory that you know the basics of cooking.  How to grill chicken and knowing when it's done.  How to toss a salad, fry a quesadilla, make basic chicken salad... If you don't know how to do that stuff, then you need to be reading better blogs than mine!

Start by grilling a big pack of boneless, skinless chicken breasts, basting it frequently with a buffalo wing sauce of your choice. When the chicken is done (use a thermometer to make sure!) cool, use it or store it in the fridge.

Heat corn tortillas on a griddle and top with the chicken/veggie mix and a little shredded Monterey Jack cheese.  Top with another tortilla.  Grill until toasty, flip and toasty the other side.  Serve with blue cheese or ranch dressing or additional wing sauce.
Buffalo Chicken Salad Lettuce Wraps
Chop chicken and celery into small bits.  Stir in Miracle Whip or mayonnaise, a little Kraft Ranch dressing (optional) and buffalo wing sauce to taste.  Serve wrapped in lettuce leaves or on a bed of shredded lettuce or make a sandwich with your favorite GF bread or wrap. 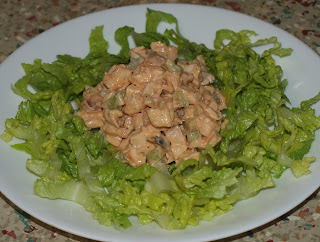 I've done some browsing on the internetwebs and in some cookbooks and I've come up with a whole list of ideas that I want to try:

Mmmm,I don't know where to start!
Posted by Squeak at 4:16 PM