It snowed Thursday.  And not a good snow.  This was icky and wet and not enough to cancel school. As far as snow goes, it was pointless

We don't have sidewalks in our neighborhood and I'm pretty sure that our street is the last one in the state to get plowed so I had to trudge up hill, through the snow, to the school bus stop.  And then, in the afternoon, I had to slog down the hill, through the slush (because they still hadn't plowed) to get back home.

It really made me miss summer...
And Veronica.

So I thought I would do a little summer reminiscing and I was looking through photos of me and Veronica and it got me thinking.
I don't think I ever introduced Jareth and Fezzik. 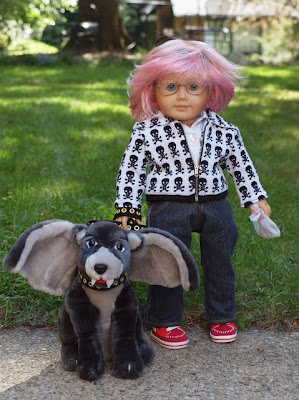 He's a gargoyle.
And my friend.
Most people say he's my pet because we're attached to each other with a leash when we go for walks and I feed him and pick up his poop and stuff. But my human friends and I walk arm in arm so we're attached to each other and I feed them when they visit and I would pick up... well...  But that's what friends do for each other. Doesn't matter if they are human or animal or gargoyle.

So anywho, Jareth isn't your typical gargoyle.  He was raised with a litter of puppies so he acts like a dog.  Except when he gets excited he wags his tail and flaps his wings.  Luckily, he never learned how to fly because that would cause some serious big problems in the house and Ma would frown upon that! But he's a pretty good friend, even if I have to carry plastic bags when we take a walk!

And this is Fezzik. 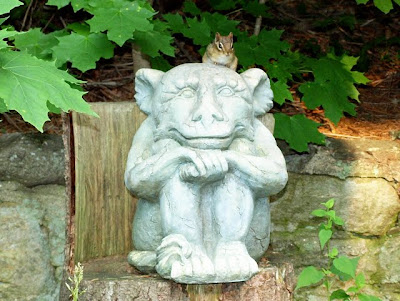 He's a gargoyle, too.
And Veronica's friend.
(Well, technically, he's a grotesque but Veronica says he prefers to be called a gargoyle.)

Fezzik sits near the entrance toVeronica's hole.  Veronica says gargoyles are good protectors and they scare off evil spirits.  I'm not sure I believe that.  I've never seen Fezzik scare anyone.   I mean really, look at that face.  Every time I see him, he smiles at me.  And Jereth... I'm not sure how good of a protector he would be. If evil spirits are like the mail man and carry a pocket full of cookies, Jareth would be their best friend!

Pop Quiz!
Where did Jareth and Fezzik get their names?
Posted by Squeak at 3:31 PM

Email ThisBlogThis!Share to TwitterShare to FacebookShare to Pinterest
Labels: dessert