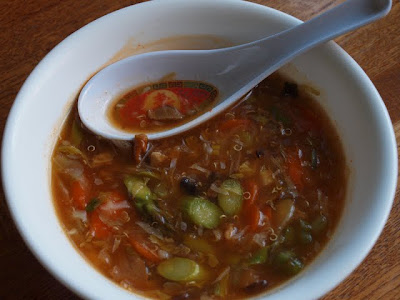 Jinkies!  I can't believe it's been months since I've written anything!  I bet you thought I was hibernating with Veronica. Nope. I've just been kind of busy... and a little lazy.  And now I'm sick.

I have a cold. It's not fair that I get sick during a school break! But here I am, snuffling and coughing.


With a hankering for hot & sour soup.  Nothing clears the sinuses like it!

So I threw together this veggie and quinoa soup with a hint of hot & sour.  It turned out so good, that I made it again, 2 days later!  Use whatever veggies you have on hand.  The first time I made this, we happened to have fresh asparagus in the fridge, which we hardly ever have this time of year.  The second time I made it, I added some frozen green beans and peas. The dried mushrooms add a wonderful flavor to the broth and I love their chewy texture but if you don't have 'em or don't like 'em, leave 'em out. I bet bean sprouts (fresh or canned) would be a tasty substitute for the cabbage.  And some leftover roast pork, roast beast, chicken or tofu would be an awesome addition.

It looks like a lot of ingredients and a lot of work but trust me, it goes together quickly.  About 30 minutes after I thought, "Mmmm, soup would be good." I was eating soup.  While the mushrooms are boiling, pull together the rest of the ingredients and start peeling and slicing veggies.  Keep the heat high enough so the soup remains at a gentle boil.  This will keep things cooking quickly as you add new ingredients to the pot.


Cold Comfort Soup
Bring the water, bouillon (or broth) and the dried mushrooms to a boil and boil gently for about 10-15 minutes.  With a slotted spoon, scoop out the mushrooms and set aside to cool.

Add the quinoa to the boiling broth.

Add the ginger, garlic, tamari, apple cider vinegar, a little Sriracha sauce and a little hot sesame oil. Don't add too much! You can add more of these things later but there isn't much you can do if it gets too hot, sour or salty.

Reduce heat to a gentle boil and cover.

By now, the mushrooms should be cool enough to handle.  Chop them up and return to the pot. Cover and continue to boil gently for about 5 minutes.

Add the carrots and celery.  Cover and continue to boil gently for another 5 minutes.

Add the cabbage, asparagus  (green beans, peas), water chestnuts and the white part of the scallions.  Cover and continue cooking until the veggies are tender crisp. About 5-10 minutes.

Taste and adjust the seasonings.  Stir in the green parts of the scallions and drizzle some sesame oil over the top.

Makes about 4 servings
Posted by Squeak at 4:57 PM

Email ThisBlogThis!Share to TwitterShare to FacebookShare to Pinterest
Labels: soup of the day