The heat wave we've been having finally broke and I went out to play with Veronica.  I haven't seen much of her for the past couple days.  When I was outside, I was either at the splash park or the pool.  Veronica said she wasn't crazy about getting wet and preferred to stay in her comfy cool home, deep in the stone wall.

But today was nice so we went for a bike ride.


The whole time she complained that I wasn't going fast enough.
Eddie's motorcycle went so much faster and was much more fun, so she said.

I reminded her that Eddie won't let her ride his bike anymore.
Be happy riding with me.


She thought maybe riding in the basket would be more fun but before I could stop, she climbed over my head 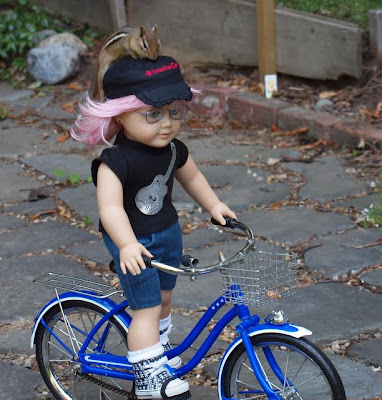 and down my arm to the basket!
I thought it was a mighty fine trick and maybe we should join the circus.
Or sell tickets.
We could make money.
I could buy my American Girl doll.
Veronica could pay the mechanic's bill.

She came running out of the house, yelling at us to put on our helmets so we don't break our brains.

Helmets?  Who wants to watch us wear helmets?  There's no death defyingness in helmets!  Where's the excitement in that?

So we decided to take a break and snack on some apples with peanut butter
and try to think of some other way to make some money...
Posted by Squeak at 2:18 PM