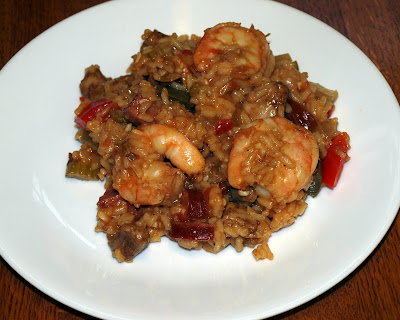 
This is based on Emeril's recipe for Cajun Jambalaya except I made a few modifications. 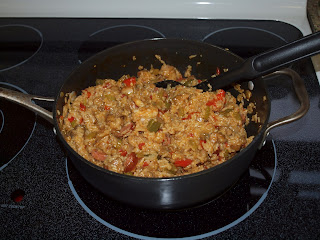 Stir in the shrimp and cook about 5 minutes.  Stir in the chicken and sausage, cover and remove from the heat.  Let set for 5-10 minutes, until the chicken is heated through and the shrimp is cooked.  Taste and adjust seasonings, adding salt, hot sauce and more Cajun seasoning, as desired.

In a frying pan, cook 4 strips of bacon till crisp.  Remove the bacon from the pan.  In the bacon grease, saute some (1/8 cup) finely diced onion til tender, add the green beans (about 1 pound) and saute until tender crisp. Stir in 1 tablespoon sugar, 1 tablespoon vinegar and crumbled bacon, simmer a minute.  Salt and pepper to taste.

Email ThisBlogThis!Share to TwitterShare to FacebookShare to Pinterest
Labels: the main course