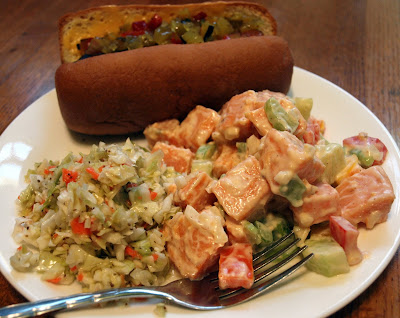 This is what I had for supper tonight.
A hot dog on an Udi's bun, coleslaw and sweet potato salad.


I really prefer to eat my hot dog rolled up in a warm corn tortilla with some melted cheese but Ma bought Udi's buns so I'm eating them.   They really aren't bad, Udi's buns, but I would like them better if they were soft and squishy like the glutenful buns that I remember so long ago.  I can hardly believe that it's been over 2 years since I've eaten one of those!

That's my Aunt Jill's homemade zucchini relish on that hot dog and some melted cheese. That relish almost makes up for the lack of squishy bunness!   It's scrumptious!

I made the coleslaw earlier this week.  It's my Aunt Mary's recipe.  It's not the healthiest thing I make since it has a lot of sugar but it is so good.  Plus, you can store it in the fridge for 2 weeks and it gets better every day!  Add whatever veggies you like.  Red bell peppers and celery are good. This is best if you make it the day before and let it hang out in the fridge overnight.

Coleslaw
In a large bowl, combine cabbage, carrot and onion.  In a small sauce pan, combine sugar, vinegar, oil, celery seed and salt and bring to a boil, stirring until the sugar dissolves.  Pour the hot dressing over the veggies and mix well.  Cover and refrigerate over night and up to 2 weeks.

Sweet potato salad... I think I like it better than regular white potato salad.  The heat from the chipotle chili powder and the hot sauce complement the sweetness of the potatoes without making it overly spicy.

Place the sweet potatoes in a pot and cover with water.  Bring to a boil and cook just until tender. Don't overcook them!  Drain and plunge into a bowl of cold water and drain again or rinse under cold running water until cool. Transfer to a large bowl and put in the fridge to chill while you chop the veggies and make the dressing.

In a small bowl, combine the yogurt (or sour cream), Miracle Whip, mustard, chipotle chili powder and hot sauce. Whisk in the milk or water.  Taste and adjust the seasonings, adding salt and more mustard, chili powder or hot sauce to taste.

Add the veggies and dressing to the bowl with the potatoes and toss gently.  Cover and refrigerate for at least 2 hours to let the flavors meld.  Enjoy!

Email ThisBlogThis!Share to TwitterShare to FacebookShare to Pinterest
Labels: sides